League Final delight for U13 Footballers 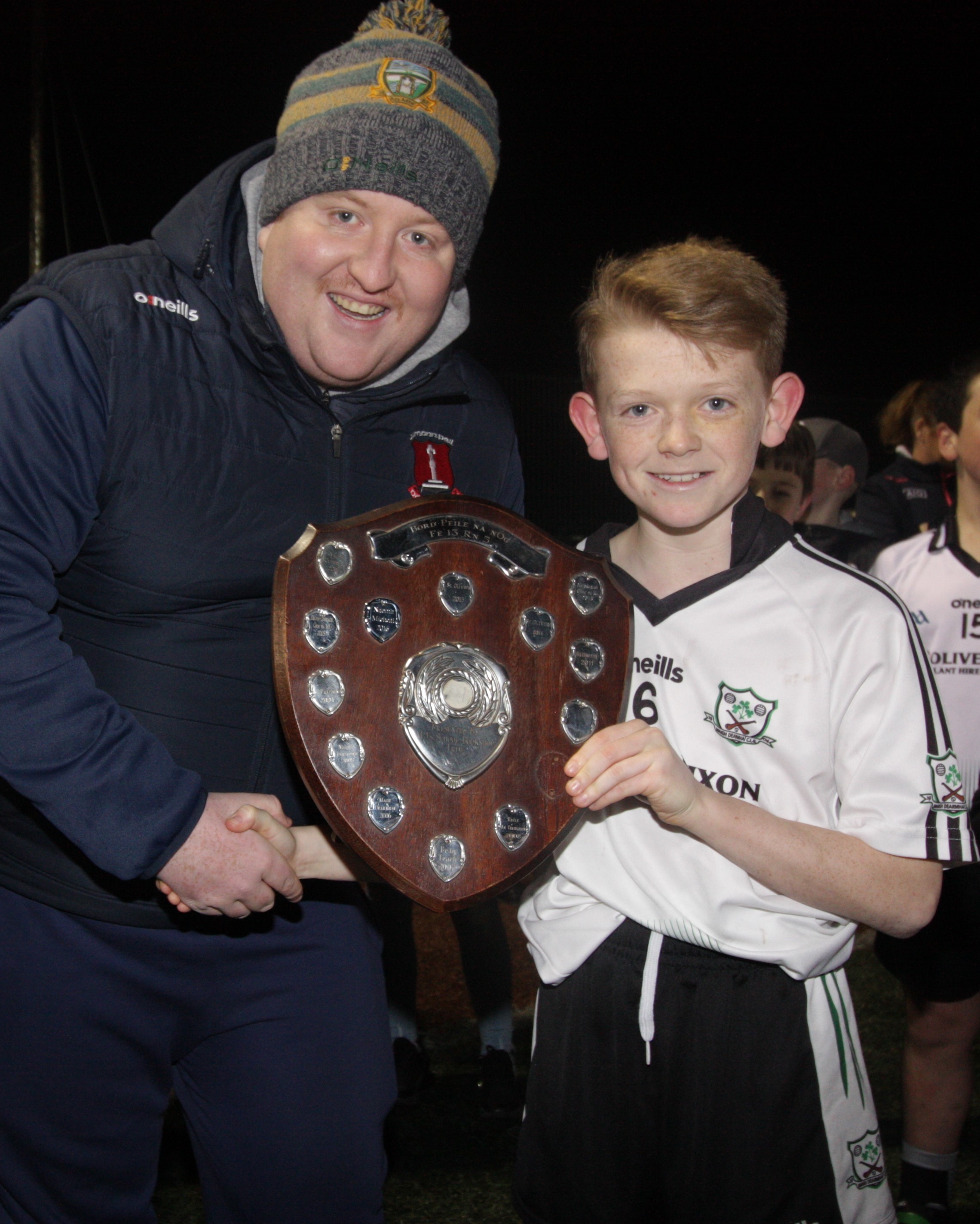 Published: over 1 year ago

Download our mobile app to hear more about Longwood GAA. 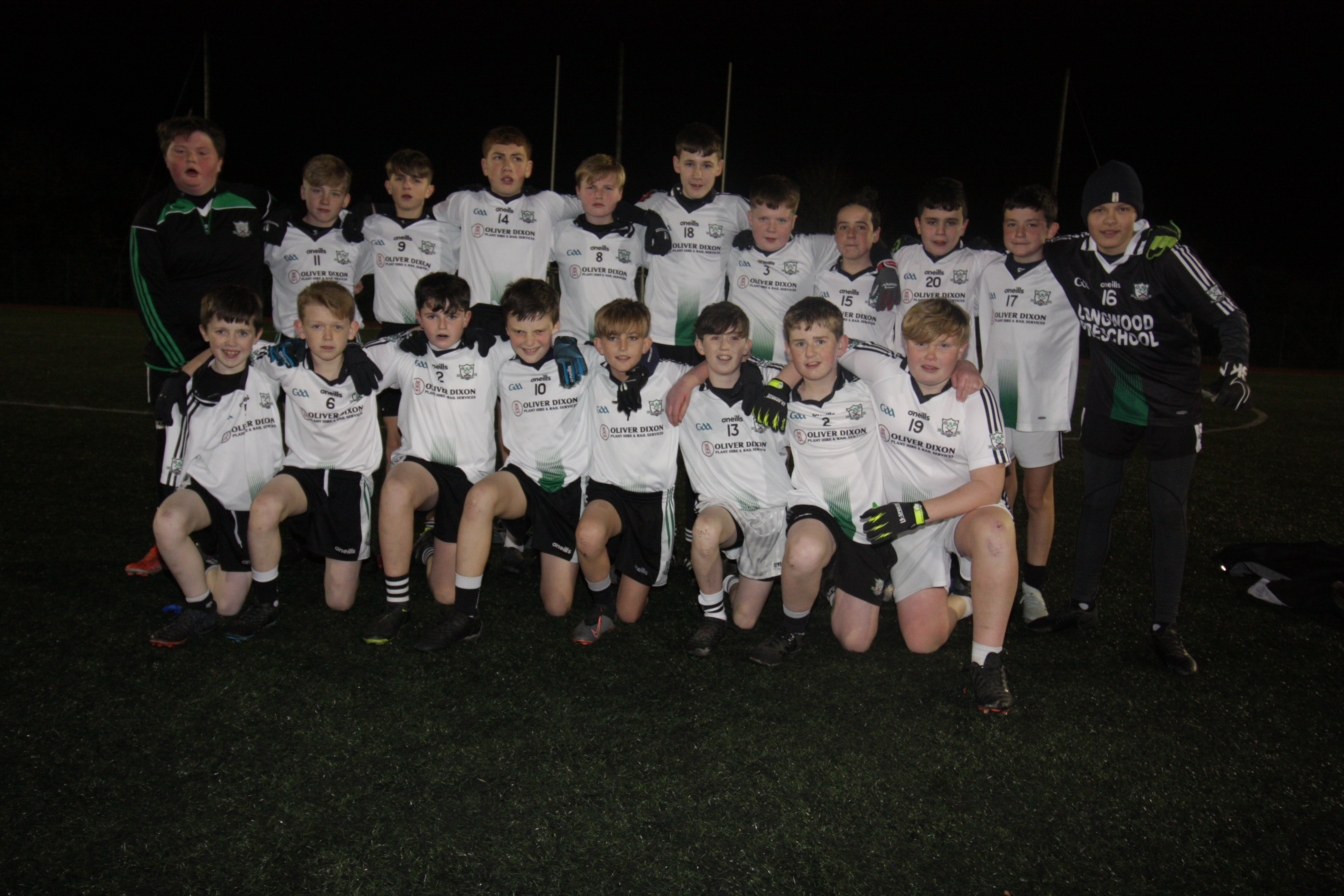 The lines of demarcation between the neighbouring parishes of Longwood and Enfield can often be blurred but when the final whistle blew at the end of this pulsating U13 Football League Final, it was the young men from Longwood who were the clear and deserving winners.

The formbook would have had Na Fianna billed as firm favourites, having easily accounted for Longwood in an earlier round of the league and racking up some impressive tallies since then. Longwood would undoubtedly have their work cut out to reverse that form.

True to form, the boys in black and amber started on the front foot, attacking at every opportunity and playing the ball around confidently. Longwood appeared to be chasing shadows as Na Fianna registered a couple of early points and indeed the damage could have been much worse but for a couple of point-blank saves from Longwood ‘keeper David Dixon. Such was the attacking confidence of the Na Fianna players, they were content to leave huge spaces in their backline and, on 16 minutes, this was exploited when Malachy Burke-Fisher, a constant threat, played a superb crossfield ball to Longwood dangerman Ben McLoughlin who rounded his marker and finished to the net from an acute angle.

Although against the run of play, it provided a huge confidence boost to the Longwood players and their use of the ball while in possession improved dramatically. Burke-Fisher broke through the Na Fianna defence again only to be taken down with the goal at his mercy. The resulting free saw the white flag raised and brought the teams level with 8 minutes remaining in the opening half.

Na Fianna continued to move the ball well and finished the half strongly, kicking two further points to take a 0-6 to 1-1 lead to the break.

While Na Fianna retired to the dressing room for their half time break, the Longwood team and mentors huddled together on the 21 yard line and, in the cold Dunganny air, formulated a winning plan.

The subsequent second half display by this young Longwood team will live long in the memories of all those lucky enough to witness it. Make no mistake, it was characterised by incredible work rate and a massive defensive effort interspersed with flashes of attacking brilliance. Captain Conor Dixon, flanked by the industrious Harry Leigh and Fionn Hannon in the half back line, broke up countless Na Fianna attacks and those that managed to get through were capably handled by Cian Colgan, Adam Peacock and new ‘keeper Sandjis Buls.

Midfielders Laoghaire Connolly and Brian Stagg covered every inch of astroturf in their support of defence and attack and it was this strong running that repeatedly unlocked the Na Fianna defence. A clever pass from Luke Brady put Malachy Burke-Fisher through to smash home a goal early shortly after the restart and he followed up with a couple of well taken points from play.

A superb point, off his left foot, by Conor M Dixon put Longwood further ahead and with Na Fianna being limited to speculative efforts at the other end, a second goal from Ben McLoughlin with 10 minutes to go allowed the numerous Longwood supporters to dream.

Stout, committed and disciplined defending with the concession of only 4 second half points was ultimately the winning of this game and the final whistle was greeted with the cheers of the Longwood support.

Captain Conor Dixon accepted the trophy from Meath PRO Ciarán Flynn and in a short speech, acknowledged the Na Fianna team and mentors, thanked the coaches for their dedicated coaching and mentoring and thanked all the parents for their support throughout the year.

But the real credit goes to the players. Each and every member of the panel has made a massive contribution throughout the year and they fully deserve their success.

Longwood U13’s will forever remember November 2019………..even more so given that so many of the panel also tasted U13 Hurling League success a mere five days earlier. 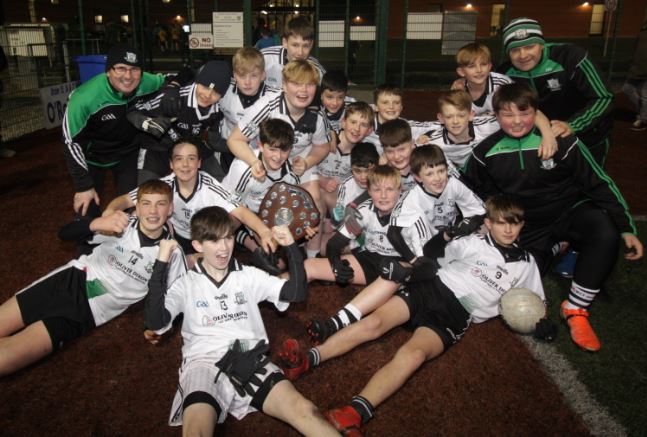 'No player left behind' as John West Féile moves to U15 a...

Leinster Final Glory for Billy and the boys!

Meath overcame a determined Offaly side to claim provinci...

Congrats to all our young graduates!

Huge congrats to the boys and girls of 6th class as they ...

Get live information for Club on the ClubZap App