Longwood lose out in opening round of Championship 2020 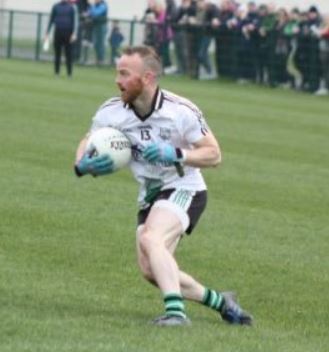 Published: about 2 months ago

Download our mobile app to hear more about Longwood GAA.

Longwood’s first championship outing of 2020 ended in defeat at the hands of a well-drilled Meath Hill outfit in Navan on Saturday evening.

While the final scoreline might indicate a close encounter, in fairness to the men in blue, they were deserving winners. That said, Longwood will rue a number of missed opportunities which could have given the final scoreline an utterly different look.

Meath Hill took the lead, a lead they would never relinquish, in the opening minute. Longwood missed a couple of opportunities, from open play and from a free, before Damien Healy got on the end of a well worked move and clipped over a fine point with his trusty left foot.

Alas, a further 19 minutes would pass before Longwood registered their second score, during which time their opponents tagged on seven unanswered points. Thomas Coloe, who looked dangerous throughout, scored a fine point which was quickly followed by a Mickey Burke over to reduce the deficit to five points. These scores appeared to have given Longwood a foothold in the game but critically, Meath Hill responded with two quick points to restore their seven-point lead at halftime.

Turning around a seven-point deficit was never going to be easy, even with the benefit of a gentle breeze. Longwood needed a fast start, but it did not materialise. A couple of early wides didn’t help and it was their opponent who struck the opening score, pushing the lead out to eight points. After nine minutes Ross Kerrigan decided he had seen enough; taking the bull by the horns he charged upfield to kick a wonderful point from a difficult angle. Almost immediately Meath Hill responded with a pointed free. This was very much the pattern for the opening three quarters of the game.

As the game moved into the final 15 minutes, Longwood finally threw off the shackles and played with more abandon. A Mickey Burke free followed by an excellent effort from play from Aaron Ennis seemed to energise the team. A couple of minutes later, Kevin Maguire drilled a magnificent kick out into the path of Niall Mulvey – the midfield powerhouse charged forward towards the opposing goal and, as he reached the 20 metre line, deftly hand-passed the ball to Thomas Coloe who smashed it to the roof of the net. The Longwood support (all 55 of them!) made some noise and started to believe that, what had seemed like an unlikely comeback may yet be possible.

Sadly, any momentum that had been created was obliterated just a couple of minutes later when Longwood’s Paul Gill was injured in an aerial clash with a couple of other players. It was completely accidental as all players had their eyes fixed on the ball but that is of little consolation to Paul who had only just returned from long-term injury. After being treated on the pitch for 10 minutes, Paul was eventually helped from the field. It is rotten luck for this fine young footballer and hurler who has been blighted by injuries which have kept him away from the games he excels at for the best part of two years. We all wish him a speedy recovery.

As the game restarted, supporters tried to calculate exactly how much time was left to play. Longwood were still five points in arrears and needed scores quickly. But again, Meath Hill were quickest off the mark with another pointed free.

Over the closing minutes Longwood displayed their trademark resilience and determination, finishing the game with four unanswered points. All four came from dead balls, one each from Ryan Moore and Mickey Burke combined with two excellent long-range efforts from Harry Hogan. Unfortunately for Longwood they simply ran out of time.

So a disappointing result but the last quarter showed what the team are capable of. During this period, they outscored their opponent 1-6 to 0-2. However, the damage had already been done in the earlier part of the game.

Longwood’s team had a very different look to the one which took to the field the last time they enjoyed the surroundings of Páirc Tailteann, in the IFC final of 2018. Younger players such as Thomas Coloe, Harry Hogan, Evan Coyle, Ross Kerrigan, Fearghal O’Hare and Niall Mulvey have been asked to take on greater responsibility and they responded well, particularly in the final quarter when Longwood belatedly started to exert some control on proceedings.

So what next for Longwood? Well it’s essentially knock-out from here on in as nothing less than victory in their final two group games will suffice. It certainly won’t be easy but yesterday’s strong finish will certainly give players and management hope as they approach the second round on Sunday week.

U13 Hurlers lose out in League decider

Longwood’s U13 Hurlers went down to a strong Kiltale tea...

U13 Hurlers through to League Final

Longwood's U13 Hurlers brought some much needed cheer whe...

Championship 2020 comes to a disappointing end for Longwood

September 13th certainly proved to be unlucky for Longwoo...

Longwood's Minor Footballers lost out to a strong Dunderr...

Longwood to take quarter-final route after defeat to Trim

Longwood and Trim played out an entertaining, high scori...

First Communion in Longwood this weekend

Friday and Saturday marks a special event in the lives o...

Get live information for Club on the ClubZap App